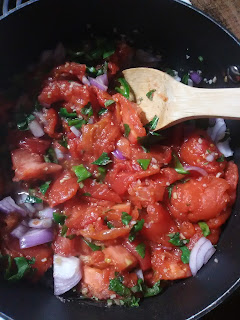 The taste of spaghetti sauce is something that no two people completely agree upon. Some prefer a sweet sauce, some go for a more acidic sauce with a kick. Some love a sauce heavy on basil and oregano, some want only the taste of tomato and garlic. My family prefers this homemade sauce that I made fresh seasonally and can for the winter.

Roughly chop all ingredients and simmer in a large sauce pot until the onions are translucent and soft. Allow to cool to room temperature, then pour into food processor and blend until smooth. Pour the sauce back into the pot and continue to simmer while your spaghetti noodles cook. You can add meat to the sauce at this point as well. 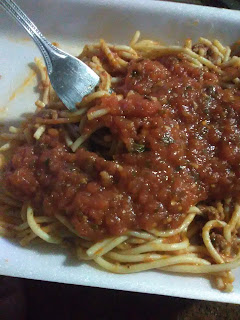 Pour over a bed of noodles and enjoy!

You can also serve in dishes as dipping sauce for bread sticks! 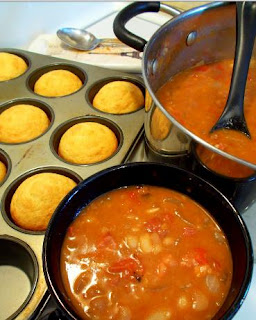 I serve this soup all year long, but it’s especially pleasing during the colder months. What you choose to put in your vegetable soup is limited only by your taste preferences and creativity. The following recipe is a favorite of my family and the same one that I home can – but experiment with different vegetables that your family love!

Boil until the onions are soft and translucent. Cool to room temperature, then blend until smooth in food processor or blender. Pour into a large soup pot.

Brown the meat and add to the soup base, then add all the other ingredients. Simmer for 30 minutes, then taste, and add salt/pepper to your liking. Simmer for another 45 minutes.

Grease your muffin tins, and preheat oven to 350 degrees. Pour in the batter and bake for 35 minutes, or until golden brown. Enjoy! 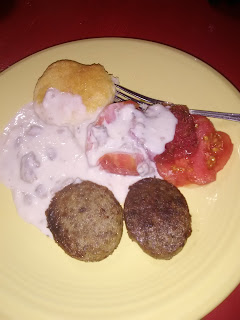 A Southern breakfast favorite, tomatoes and gravy are a match made in flavor Heaven!. When I prepared it in Chicago and even in Cheyenne – it received some looks to say the least! But one taste, and the critics were giving me the thumbs up and asking for seconds.

Fry the breakfast meat until golden brown, and save the pan drippings. Add the grease and turn the burner to high. Stirring constantly, slowly add the flour and allow the mixture to form a rue. (thicken) Slowly add the milk, still stirring, until the gravy reaches the desired thickness. Add the salt/pepper to taste.

Peel and slice the tomato, then pour the hot gravy directly over it!

Mix all ingredients together, then roll and on floured surface until smooth. Flatten to ½ inch thickness, cut into biscuits. Bake in greased pan at 350 degrees for 35 minutes. 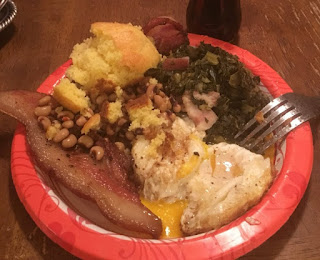 Unless you were raised on this Southern mainstay - you're likely not a fan. But, perhaps you've simply never had it prepared for you in the right way!

The key to delicious black eyed peas and hog jowl is flavor layering. Before a pea hits the pot - you'll have some work to do!

Begin with fresh, smoked, hog jowl from a local processor. Contrary to what you may have read online, ham hocks and hog jowl are NOT the same thing, and they have a completely different taste! Ask that the jowl be thick "bacon" sliced, so that you can get it fried crisp. To season your peas, you'll need to fry 3 slices. Let them cool, then chop into bits.

In the skillet with the gresse where you fried the jowl, add 2 cups water, the jowl bits, 1/2 teaspoon salt, 1/2 teaspoon red pepper flakes, and 1/2 cup finely chopped sweet yellow onions. Boil until rolling, then add 2 cups frozen black eyed peas. Cover, and simmer for at least 45 minutes, several hours is even better!

My family loves the jowl fried crisp like bacon, but there's many ways (and variations) to how you can cook it. For a unique twist, try wrapping a slice of jowl around asparagus spears and baking it!

My family loves this dish served with turnip greens, corn bread, and fried potatoes - but some people enjoy other sides. Experiment, get creative, and maybe even change your luck in the coming year! 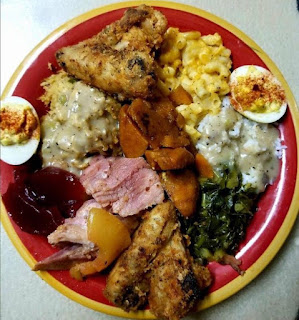 I could have posted these recipes separately, but since this is my traditional Thanksgiving meal every year, I decided to list them here all together. I'll do a separate list for my Thanksgiving Deserts.

Hands down, the best turkey you can serve is the one you harvested yourself. And if that turkey just happens to be young and plump - oh, son!

First, just go ahead and check one more time for lead pellets. The easiest (and most sure-fire way) is to run your metal detector on over that bird. Go on, now!

Next, you'll need the following to stuff the carcass with:

Roll the herbs into a bundle, tie with cotton string, shove into the cavity toward the neck. Next, lay the can of beer into the cavity, opening turned UP so the beer doesn't all pour out.

Bake upside down (breast down) uncovered at 350 degrees for 45 minutes. Then turn over, cover pan with aluminum foil and bake for another 45 minutes. At this point, you'll want to remove the beer can and spices, drain all the juice from the pan, cover the wing tips and legs with aluminum foil. Cover entire turkey with butter/sage again, and bake for another 30-45 minutes, uncovered. Once the breast is golden brown, remove the foil from wings and legs and allow them to brown as well. (Save herb bundle and pan drippings!)

Again, the best ham is from your own hog! But if that's not an option for you, try to buy one from a processor. I prefer bone-in, smoked hams. Avoid pre-sliced, because you'll loose much of the natural juices in cooking and have very dry meat.

Coat the entire ham in a mixture of 1/2 cup brown sugar, 1/2 cup maple syrup. Then wrap with bacon. I generally use an entire pound for this.

Wrap tightly with aluminum foil, and place in baking pan. Bake at 350 for 35 to 40 minutes. Set aside to cool.

When you can, remove aluminum foil, and slice the ham from the bone. Leave the slices in the pan juices, and cover the pan in aluminum foil. Before serving, pop back in the oven for 10 minutes. (Save pan drippings!)

In a large pot, toss in your ham bone and trimmings, fresh or canned turnip greens, and water to boil. Boil for 25 minutes, then lower the heat to simmer. Add 1 whole or sliced Jalapeno pepper, 1 teaspoon sugar, and salt to taste. Cover and allow to simmer until served.

You can make one or both from the same cornbread batter. For the batter, you'll need:

Herb ball from the turkey, remove the cotton string

2 cups self-rising Cornmeal (not the mix!)

Put the herbs and 1/2 cup of your Buttermilk into food processor and process until herbs are well ground. No stems!

Mix everything (EXCEPT cheese and jalapeno!) together in large bowl, then pour into greased cast iron skillet. One ONE HALF add the cheese and peppers. Bake at 350 degrees for 25-30 minutes.

Allow to cool, then divide. Slice 1/2 for cornbread (cheese/pepper half), crumble the other 1/2 for stuffing.

Giblets - if you prefer!

In a baking bag, combine all ingredients, then bake in a pan at 350 degrees for 35 minutes or until yams are soft. Remove and drain liquid.

Place yams in greased glass baking pan, then sprinkle with:

Cover with aluminum foil and bake for 25 minutes at 350 degrees.

1 slice of your cornbread

Pour into greased glass baking pan. Crumble cornbread, mix with parmesan, and sprinkle on top of macaroni and cheese. Bake uncovered at 350 degrees until cheese bubbles and browns on top.

Boil potatoes until soft, add cream, butter and salt/pepper. Mash by hand with a fork, leaving the mixture chunky.

In a skillet, melt butter, then turn heat to high and stir in flour slowly to make a rue. When combined, while bubbling hot, slowly pour in milk, stirring constantly. Once the milk starts to thicken, slowly add pan drippings to thin until gravy reaches desired thickness. Add salt/pepper to taste.

I generally add deviled eggs, homemade cranberry sauce, and pickled peaches as side dress. But, you can use anything of your liking. 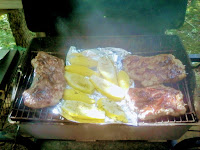 Grilled to perfection pork steak and yellow crookneck squash is a summertime favorite of my family! This is another recipe that is best grilled over a hardwood bed of coals instead charcoal. Both the pork steak and squash tend to take on the taste of lighter fluid if you use charcoal.
4 pork steaks
2 large crookneck squash, planked.
Pork Steak Marinade
1/2 cup buttermilk
1 teaspoon garlic powder
1/2 teaspoon paprika
1/4 teaspoon red cayenne pepper
1/4 teaspoon salt
1/4 teaspoon black pepper
In a large zipper freezer bag, combine all ingredients and the raw pork steak. Refrigerate at least 4 hours, over night is even better!
Squash Rub
1/2 cup olive oil (to brush on squash)
1 teaspoon dry Italian seasoning mix
Salt/pepper to taste
Rinse your steaks and pat dry on paper towel. Salt/pepper to taste, and put on your grill.
Brush the squash slices with olive oil, sprinkle with the dry rub, and grill on a sheet of aluminum foil. Salt/pepper to taste.
The garlic pairs very well with the grilled pork taste, and Italian dry rub seasoning gives squash just the right kick of extra flavor without overpowering it's delicate, natural sweetness.
Feeds 4. 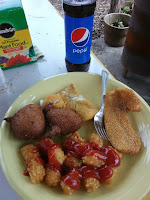 For those who might not know, crappie is a fish, and it's pronounced crOppie. My dad, Everett "Hoe Daddy" Bledsaw is the crappie fisher in our family. He's also usually the one who deep fries it as well. So, it's his recipe I'm posting.

That's it. He uses no other spices, and he doesn't marinate the fish in anything - yet, it comes out delicious!

He just mixes the rub in a gallon sized plastic bag and coats the fish fillets - then deep fries them until they're golden brown. 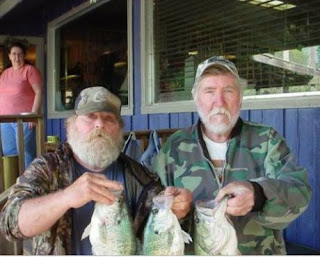 This picture was taken at Spadra Marina several years ago, with his best friend, Larry Gentry. Sadly, Larry passed away a few years ago, but we think of him every time the crappie run at the Marina in the winter. We also know in our hearts, if it's possible to fish in Heaven - Larry is tearing 'em up!
at November 21, 2020 No comments:

Angela Swanlund
"To Plant A Seed Is To Believe In Tomorrow."